If you’re interested in the Lib Tech Attack Banana – you’re going in a good direction. Lib Tech make awesome snowboards; they’ve got creative designs and their boards ooze quality. This preview will analyse the 2012 Attack Banana and the snowboarding that it’s good at – bringing all the information together to help you decided: is this board suited to you? 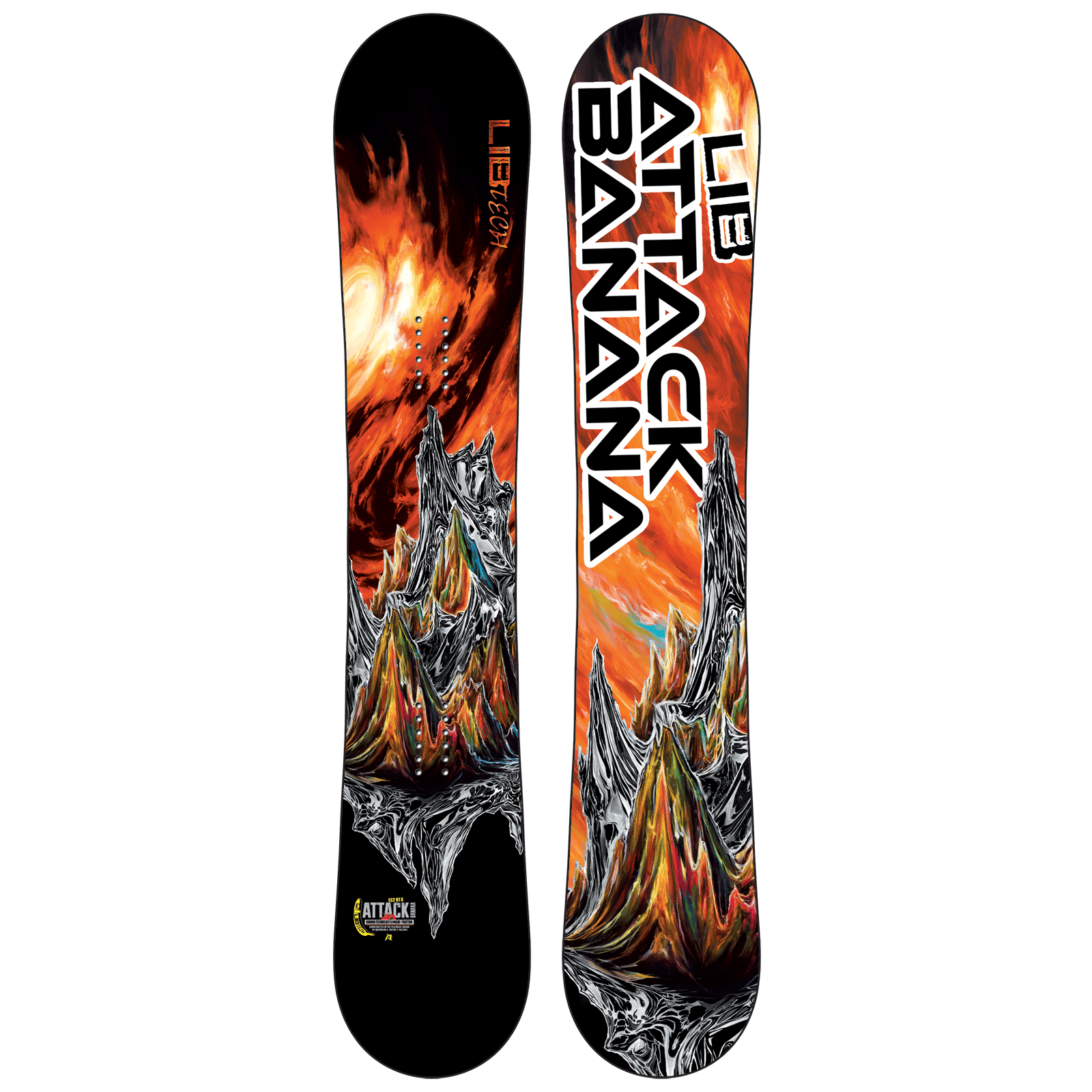 All Mountain / All Terrain Freestyle?

This board is undoubtedly aimed at all-mountain freestyle riders. Take it anywhere – with a freestyle-foundation. So what technology have Lib Tech added to make it ride like this?

The blend of “elliptical” camber and “banana” shapes has a rocker profile between the bindings and an elliptical camber extending from the feet to the contact points of the board. They’ve aimed for a medium amount of pressure at the tip and tail – that’s a good directive for all-mountain freestyle. There’s some control along the full length of the edge, along with stability and pop – but there’s also the “catch free” feel of banana along with enhance float:

Magne-Traction edges. Like other Lib Tech boards, this has their magne traction edge design. Serrated edges that provide better edge hold on ice and hardpack. This has been around for a while, it’s tried and tested. Riders think it works.

Board flex: 6 – 7. The flex of 6 to 7 accounts for the longer versions of the board being slightly stiffer. With a flex of 6, this is no jib stick. It’s playful, built for butters and pop, but not as soft as other boards in the Lib Tech range. Again, this board is aimed at freestyle riding, with a degree of control for all-mountain performance.

Other boards in the Lib Tech range

It’s definitely worth considering other snowboards in the Lib Tech range because they’ve got such a strong selection, with a few boards in the “all-mountain freestyle” category. Start with the different board technologies on the Lib Tech site. Specifically, take a look at:

Lib Tech describes all three of these base profiles as being “Twin All Terrain Freestyle”.
EC2BTX: Attack Banana (flex 6 – 7)You can see that they’re all twin and they’ve all got banana (or rocker ) between the feet, with some degree of camber from the feet to the tips. That gives a progressive range of all-mountain freestyle performance, from “most playful” to “most power and control”. Good job! Lib Tech’s flex score ranges from 1 to 10:

Accolades for the Attack Banana

The Attack Banana is off to a good start:

This video does a good job of showing the features of the Attack Banana.

Overall – who is this board for?

The Attack Banana is well positioned for all-mountain freestyle. It’s like a step up from the popular Skate Banana, so you’re going to get more all-mountain performance. That little bit of extra edge hold, control, power and stability. At the same time, it’s not as aggressive as their C2 Power Banana boards. It’s close to, but has slightly less pressure/control/power at the contact points, than the Enhanced Banana shape.

Lib Tech are giving riders good choice for freestyle performance all over the mountain. The Attack Banana isn’t cheap, but it’s loaded with good tech and has been reviewed well in 2012 board tests.

If you’re interested in the Lib Tech Attack Banana, or other Lib Tech boards, Dogfunk.com in the USA stocks those boards, as does TwoSeasons in the UK and Blue-Tomato in Europe…