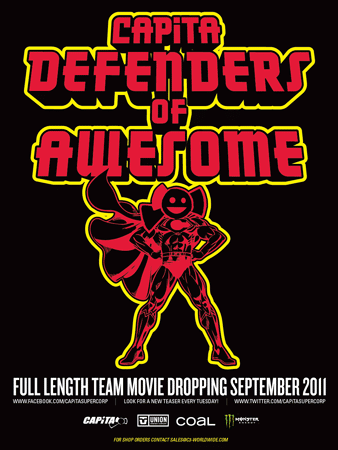 Defenders of Awesome does exactly what it says on the tin, one of the world’s best snowboard teams shows us why they deserve to defend their title of absolute awesomeness.

Including the 2011 Rider’s Poll nominees: Dan Brisse for Men’s Rider of the Year, Jessica Kimura for Women’s Rider of the Year, and Phil Jacques for Rookie of the Year. Filmed on location in Quebec, British Columbia, Washington, Oregon, California, Utah, Minnesota and New York. Scott Stevens and Dustin Craven put their stamp on modern snowboarding while up and comers Cale Zima, Brandon Cocard, and Mike Rav show why they should be in the game.

The CAPiTA team is stacked and delivers hot snowboarding action in this rare team video.

How Important is Having the “Right” Board for Powder