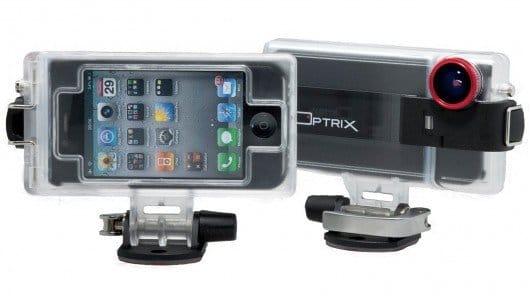 Optrix XD and iPhone – Has Anyone Used One of These?

Turning your iPhone into an action sports camera?

That’s never really appealed to me.

First of all there’s the shape of the iPhone. It’s not designed to be mounted on a pole or a helmet. It looks wrong. Looks like it would feel wrong. With snowboarding however this probably wouldn’t be an issue, not a practical one. I say probably because I’ve never tried it.

Then there’s the cost. Is it a bit risky riding around with your $600/£600 iPhone mounted on your helmet with a suction cup or adhesive pad? And it wouldn’t be like losing or breaking a camera – you’d be without your communication device and all the things that now come with it. Music, point and shoot, calendar, apps…

But they key thing for me has always been – having the right tool for the job. If I want to record HD footage on the mountain, from a small, wearable/mountable device, the best option in recent years has been the GoPro – or perhaps the Contour.

From time to time though, I get these press-release emails from Optrix (not sure how I ended up on their mailing list) and I’m interested enough to go take a look at the images and some of the products. The most recent “look” got me thinking:

Could it be worth using something like an iPhone for all your snowboarding video needs?

The iPhone 4S isn’t too shabby for video

The iPhone 4 did a good job of video (for a phone). The 4S camera was better again. Improved pictures and video is one of the key reasons I upgraded my phone at the time. You can get good results with it. (Note, I’m not mentioning the iPhone 5 in this discussion because Optrix don’t have a case for the new form factor, yet).

We shouldn’t forget the number of apps available that make it possible to work with your clips. It’s easy to do little edits right there on the device. Potentially no need to lug that laptop with you. Following on from that you’ve got all the things that are basic to a phone but not basic to an ‘action sports camera’ – like WiFi, music, social media integration.

Taking some video of you and your friends snowboarding, doing a quick edit, adding some music, then posting it on YouTube/Vimeo/Facebook while you’re still in resort… the iPhone will do a fine job of that.

Cutting down on the number of devices

My current gadget/tech set up on the hill is one of the following:

Although it’s really handy to have a phone with you, I don’t really like having both the GoPro and my iPhone. Snowboarding is the only time that I put my phone in a protective case; carrying the iPhone and the GoPro just seems a little bulky.

If I was using my iPhone exclusively for taking pictures and video, I’d cut out the need to carry the GoPro. I’d just have one device in my pocket. One device to do all jobs. Simple.

I’m looking at this from the point of view of a person who already has an iPhone and a GoPro. For anyone who has an iPhone and is thinking about adding something like the GoPro or the Contour – sticking with the phone as the ‘do it all’ device could save you a bunch of cash.

Has anyone used one of these?

The baseline product here is the Optrix XD case. Here are some of the features (taken from the website):

But there are also a bunch of accessories. I’m most interested in the “iStabilizer” options. Optrix have a pole, or iStabilizer Monopod, which is a setup that’s popular for snowboarding, especially when riding pow.

But they’ve also got the “Glidepro” (below, right). A while ago when I was looking into different ways to build a ‘handle’ for an old-school camcorder, I considered some kind of stabilisation. I posted this link, which shows you how to make your own ‘camcorder stabiliser’. Making something like that for use on the hill just wasn’t practical.

But the guys at Optrix have the Glidepro. I wonder how well that thing works? I wonder if it would be suitable/beneficial for things like follow-cam?

I haven’t put the iPhone 4S through its paces on the mountain. I don’t know what kind of results you can get with it when riding, compared with something like a GoPro.

I also haven’t used any of the Optrix cases or “iStabilizer” mounts – so I don’t know what performance these bits of kit can offer. There’s the wide-angle lens to consider and the stabilisation.

There is a quote on the Optrix site:

“The crisp high quality HD video I have collected so far with Optrix is superior to anything I have recorded with a GoPro.” – BikeRumor.com

If that’s how it is, awesome. I don’t know much about that statement, e.g. what GoPro they’re comparing it to, but in the least, it’s promising. There are some sample videos on the site that show good results. I’m not sure they’re better than the GoPro – but there are the other benefits to consider…

So here’s the question:

Has anyone used one of these set-ups?
What do you think?