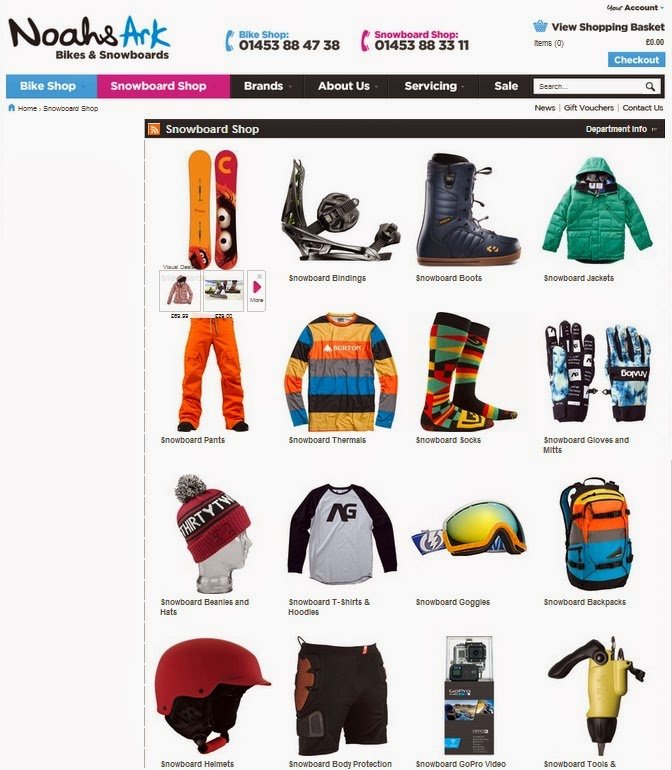 As a UK snowboarder living in Cornwall, shopping for snowboarding gear is a pretty limited affair. Unlike surf stores which there are hundreds, there’s very few specific ski/snowboard shops. Those that do exist (usually within a sports/outdoor store) often price their snowboard gear way too high compared to online retailers. So you won’t be surprised to hear that I do most of my snowboard shopping online where I can get more gear for my money.

Another massive benefit to shopping online is you can get ‘cashback’ from the likes of Top Cashback which over the past few years as accumulated in giving me cashback of well over £1,000 from my online shopping which included snowboarding gear.

There are some excellent snowboarding e-commerce sites on the web and one such website we’d like to feature today for our readers is Noah’s Ark. They sell bikes and snowboards – two of my favourite hobbies – if they sold guitars they would be my dream store! Their snowboard section is called Noah’s Snowboard Shop which is a rider-driven store giving you the low down on what you need, whether you’re a beginner that’s just starting out or you’ve been snowboarding for years.

They sell gear including snowboards, boots, bindings, jackets, pants, gloves, helmets, goggles and even snowboard tools and cameras such as the GoPro.

What I like about the website is it’s clear and easy to use – the navigation is very user friendly and as you can see from the landing page image below, the categories are well defined with easy to use clickable images: Once you are in a particular category, all the products are really easy to scroll through. Noah’s snowboard Shop has a great selection of cool snowboards, from kids to adults at great prices. They are one of the very few shops that I found to sell the kids Star Wars snowboards which I’m really tempted to get one for each of my boys.