This is a preview of the Never Summer Evo – written for riders who are looking for help from snowboard reviews. It’s a look at the information out there – is this snowboard suited to you? 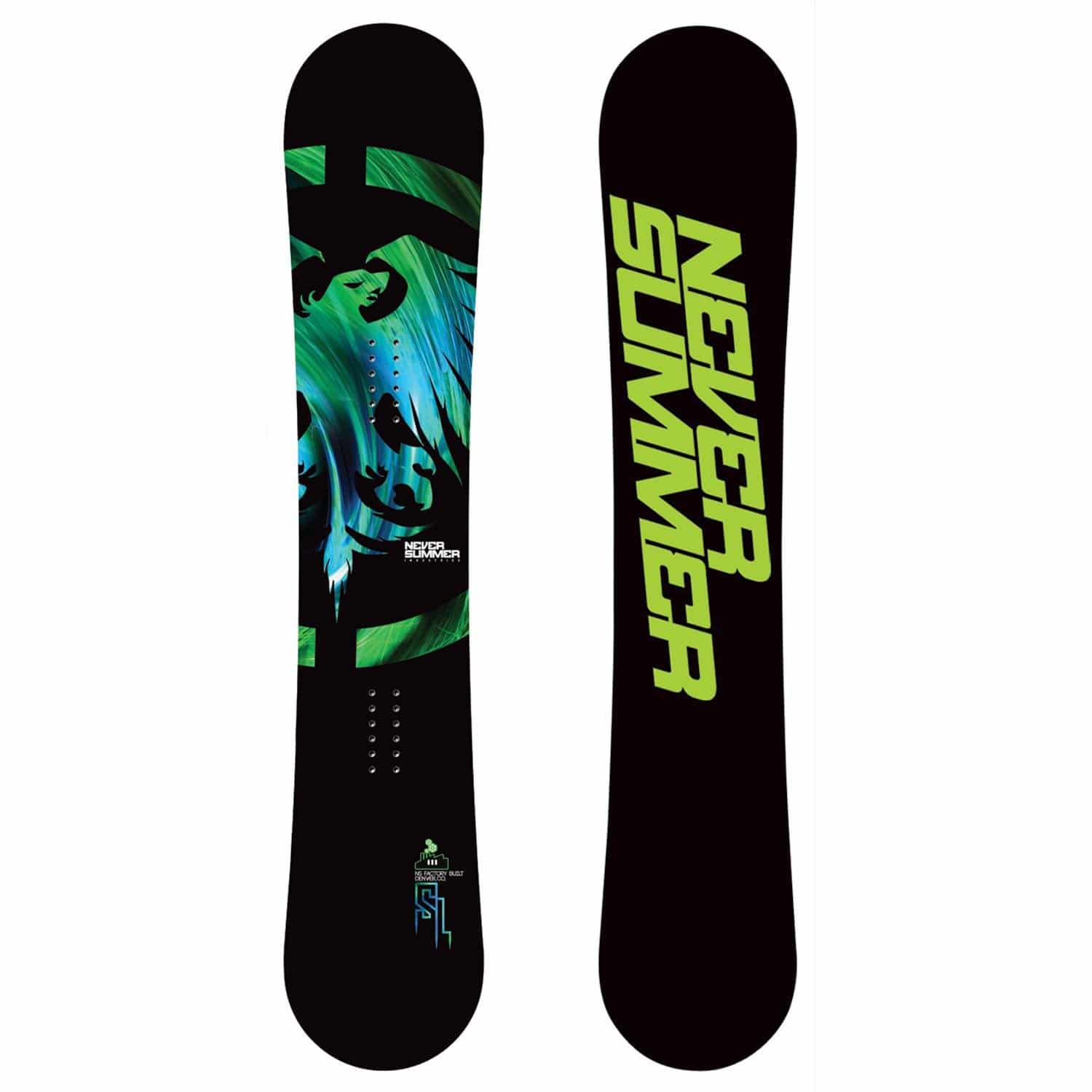 All mountain freestyle? Never Summer class the Evo as a Freestyle / pipe & park board. It’s a true twin, light, with a playful flex, which is definitely park and jib oriented. However, the Evo also packs a good amount of tech, including the Rocker & Camber base profile and the EDS damping system, making it a board that can be taken to the rest of the mountain.

Blunt shape. One of the key changes for the 2012 Evo is the addition of the “blunt” shape. Blunt edges are designed to reduce the swing weight of a board – by making the tips shorter and lower. That’s good for agility and both initiating and completing rotations.

Never Summer have also used the blunt design to increase the effective edge of the board, to better the board’s stability, something criticised in previous models. This design change is a great addition to the 2012 Evo.

Freestyle and park. It’s pretty much agreed that this is a great park board. First up the board has good pop so you’ll find it well suited to jumps, both on the piste and on park kickers. The flex profile, which Never Summer rate as 4 out of 10, makes butters and jibbing around easy and fun.

Freestyle performance is in the bag, so the key question is – how well does this board perform outside of the park?

“Rocker & Camber”. Never Summer’s R&C aims to fill in the gaps of older hybrid camber designs, that were good for park and powder, but lacked control and power when charging. The NS R&C approach puts camber areas are the ends of the board – the intention to give more “power and snap out of turns”. That camber is also going to improve ollie-snap, something that pure rocker designs can be criticised for, as well as stability when pointing it straight. The Evo also a damping system, which in the words from Never Summer:

Pistes and “all-mountain”. It seems that Never Summer have some good tech to make their freestyle boards better around the whole mountain, including a sintered base for the Evo, as you’d expect from a board at this price. In the case of the Evo, with the 2012 change to increase the board’s effective edge, it seems to be coming together nicely.

For out-right charging and carving on tough pistes, this isn’t a board that’s going to compete with the more agressive all-mountain sticks out there. But it’s a Freestyle / pipe & park board, and with the improvement to the effective edge making turning better, this is a freestyle board that can hold it’s own on groomers.

R&C vs. other combi-profiles. The combination of rocker-bend and traditional camber is everywhere now, you’ll find examples from every board manufacturer. The Evo places camber at the tips, giving it more power and stability when charging hard. It’s worth comparing this with something like the Flying V profile of the Burton Sherlock, which has rocker profile at the tips. The Sherlock is also an “all-mountain freestyle” board. It doesn’t score as well holding an edge, but the extra lift at the tips probably makes it more suited to riding powder.

This is a good look at the 2012 Evo in action; nimble for turns, decent edge hold and obviously good in the park. Check it out…

The Evo is freestyle, park and pipe at heart. Never Summer have some interesting tech that makes the board perform well, around the rest of the hill. On the scale of all-mountain freestyle, it’s fair to say that the Evo is closer to the “freestyle” end.

So if you like lapping the park, like to take your freestyle to all the other areas of the mountain, and don’t need really agressive edge control and stability, the Evo could be for you.

If you’re looking to get hooked up with the Evo, check out Dogfunk.com, they’ve got a bunch of Never Summer boards as well as great customer service.

If you’re in the UK – take a look at Bucks Boarding, they stock the Evo in addition to other Never Summer boards.

How To Do Handplants Lesson with Snowboard Addiction – Review