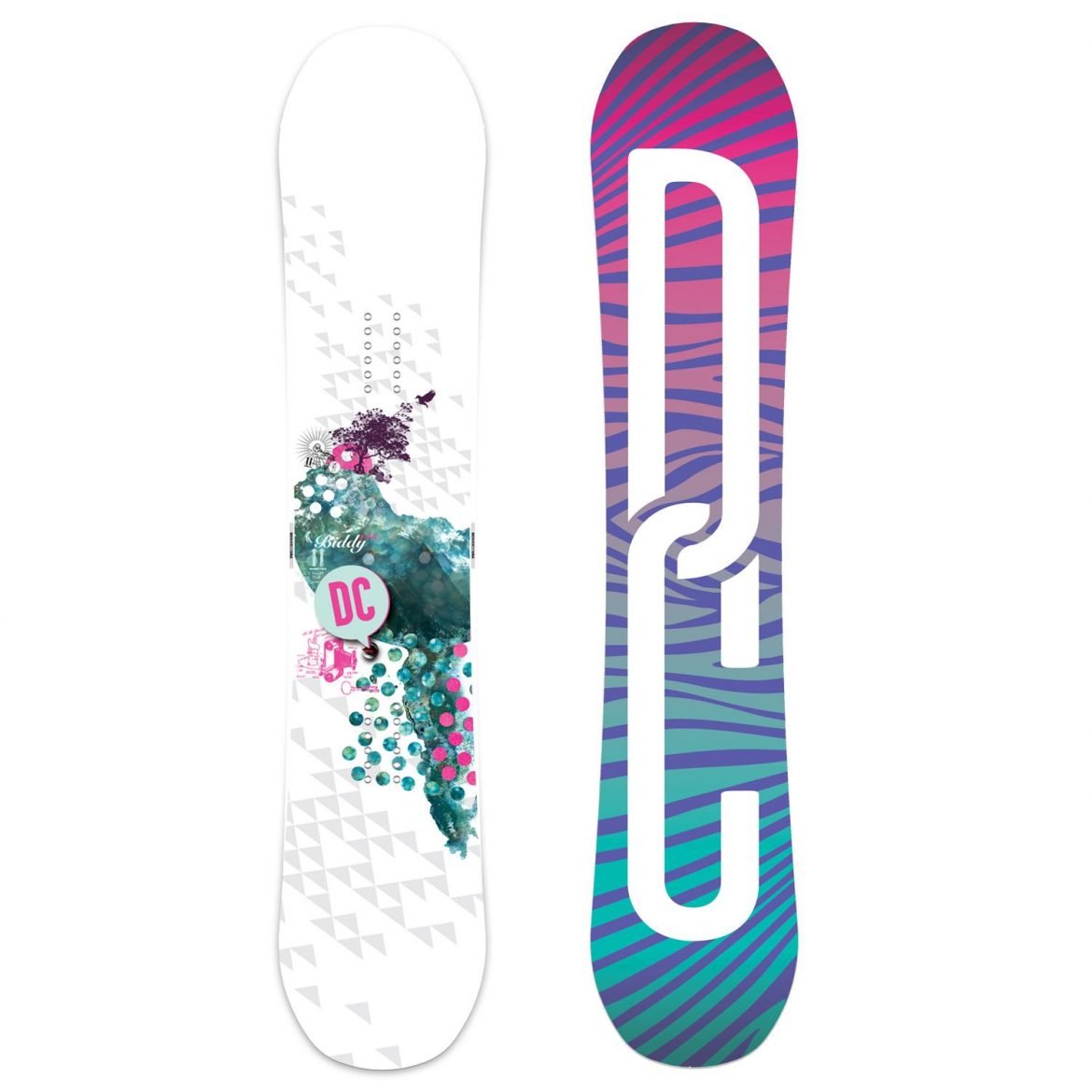 DC make a lot of good, freestyle oriented snowboards and the Biddy is no exception. This preview of the 2012 Biddy will take a look at the board’s features, to help you decide if this is the board for you. 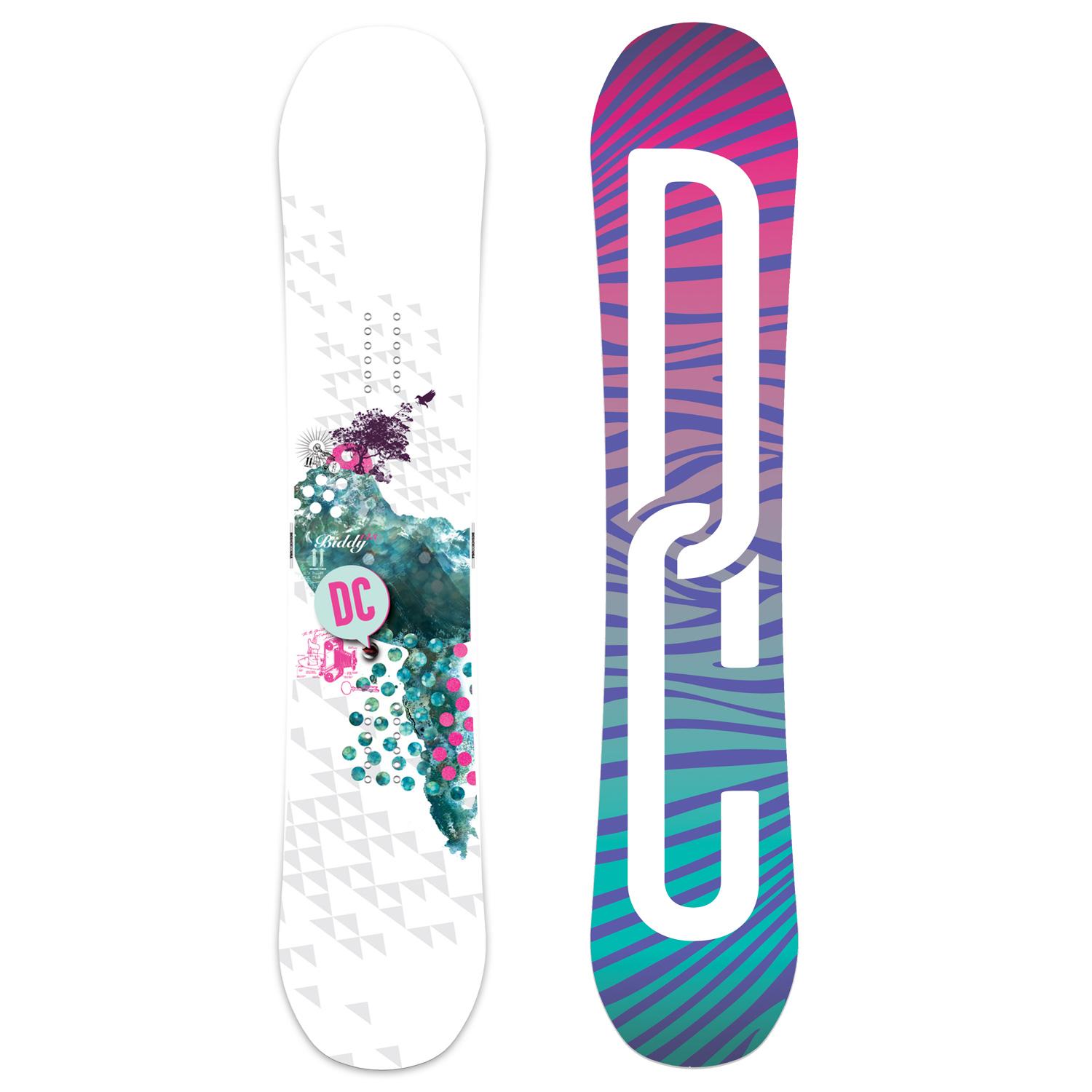 It’s a freestyle board

First things first, this is undoubtedly a freestyle board. It’s a true twin, it’s got a soft to medium flex (closer to medium), has wide stance options and has a rocker profile. If you’re after something more towards all-mountain, look for a different board.

DC Biddy has an Anti-Camber base profile

DC’s term/approach to rocker based designs is calle “anti-camber”. It’s flat between your feet and then transitions into a rocker shape. DC have a scale of anti-camber that ranges between -2 and -6. The Biddy comes in at -3 anti-camber, so it’s not the most aggressively shaped rocker profile.

A lot of board manufacturers have opted for “combi” shapes, “hybrid rockers” and the like. DC have a different approach, one that has won them a bunch of awards, it’s called camber core.

Between your feet, it’s thinner, which makes the board easier to control having less torsional stiffness. Outside of the feet the core becomes stiffer – which adds more power to the board in those areas, providing control, pop and stability.

It’s a great approach because they get to keep the benefits of a rocker shape whilst adding power back into the board – something a lot of other rocker boards struggle with.

All DC boards have a flat section near the tip and tail. The design aim is to provide more float in powder…

What does that tech mean? What’s it good at?

Good for freestyle. It’s twin, good start. That anti-camber shape helps to give the board a “catch free” feel by keeping the contact points a little more off the snow. That’s good for jibbing, both on the snow and on rails/boxes.

Another plus in this area is the camber-core profile. Thinner between the feet means good manoeuvrability for freestyle, good turn initiation, as well as making the board good for locking onto rails.

What about pop? Again, the camber core will add power giving the freestyle rider more pop for getting air, and more stability for landings.

Pretty good for powder. It’s a freestyle twin, so it’s never going to be awesome in powder. But it will be pretty good. The anti-camber profile helps to keep the nose above the snow, whilst at the same time the stiffer sections outside the bindings (camber-core) help to give resistance for your back foot.

Then there’s the Radius2Flat – another feature designed to give more float.

Groomers? Average. This isn’t going to be the boards strongest area. It’s got a medium flex and some decent stability outside of the bindings; it’s designed to be versatile around the mountain. But, it’s also a rocker shape, which never helps with edge hold. It’s going to be ok riding around the piste, but not brilliant…

Step that up to some serious carving and the board isn’t going to produce. But if you’re looking at the DC Biddy, you’re probably not too worried about the euro carves.

The following video does a good job of running through the primary design features of DC snowboards. Much of the tech is shared between all boards and it’s refreshing to see a simple approach to snowboard design, given that some brands seem to have such a confusing and complex approach!

Summary: who’s it for?

The Biddy is for freestyle oriented riders – and it does well in this area. Women who have ridden it suggest that it’s an intermediate and upwards board, despite it’s medium flex. Whilst the Biddy isn’t the best at laying down tight carves on groomers, it’s one of those rocker-based boards that has the benefit of being both good at freestyle and at riding powder. That’s a plus if you only want to take one board with you.

If you’re looking to pick up the Biddy, consider the stores below, for either the USA, the UK or Europe. These stores all stock the Biddy and provide good customer service.

How Important is Having the “Right” Board for...