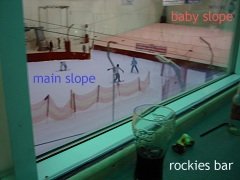 Last Friday, I returned to the Castleford fridge for the second time. As it turned out, they had a Sno!Storm event running last week. For those who don’t know, Sno! Storm nights receive a lot more effort: better park layout, live music, t-shirts and the like – plus they run it from 7pm until midnight…

This follow-up session reinforced what I felt from the first visit: my leg is dealing with snowboarding well. This time around, I didn’t get any pain at all whilst riding. We did however ride for 4.5 hours without stopping for a rest; my leg was tired the following day. Both legs were aching – but the injured one had both regular ache and some specific ache.

It didn’t last though, which again gives me confidence that I’ll continue to recover and gain strength with snowboarding in the mix.

So how was the shred?

We took a few clips of the riding. Excuse the sketchiness – we’re not after getting good shots or anything like that. It’s more to use as a bit of a record, and also to take a look at what’s going on. Watching your own technique in action can be really helpful sometimes – more on that below. So here’s a glimpse at session #2:

Watch your own snowboarding.

In the video above, there are two, poor attempts at doing a 180-out from a rail. One is frontside, the other backside. This was the first time either of us had tried to 180 out, so it was new. We started with frontside. I nailed the first two. Didn’t see them for myself but they felt good and the ride away was clean. I suggested: “let’s land 5 clean ones each then we’ll move on trying backside”. The challenge was set…

After the third, I stalled. It just stopped working; I kept sketching out. Ian suggested video’ing it so I could watch the recording of my next try (that’s the attempt above, where I slide down the snow). Wow did that help. It was clear that I wasn’t using my shoulders to help me. I thought I was because I was moving my hands around to set up for some counter-rotation, but that wasn’t enough. The next two attempts got me up to 5…