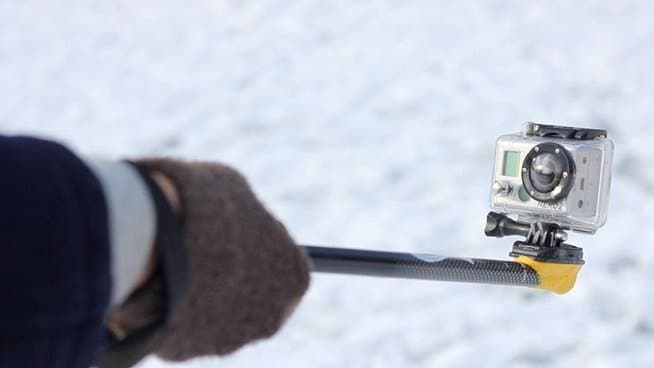 5 Tips for Using a GoPro Camera While Snowboarding

If you’re reading this, you love snowboarding. You love watching snowboarding videos online. You’ve probably thought about making videos of your own adventures on the slopes. But wait! Put down your board, take that GoPro off your head, and read this first.

Abe Alzouman, a professional video editor who specialises in extreme sports, says that if you want your GoPro videos to turn out amazing, you should follow these five tips:

1. Use the right settings!

Abe recommends 720p at the maximum frames per second (fps) your camera allows (that’s 120fps on the latest GoPro model). This is the best setting for super slomo. But if you’re, say, hanging out in your hotel room, cut your fps in half.

“This will allow more light to hit each frame and give you a much brighter and better picture,” explains Abe.

Use the maximum fps so you can see your jumps in super slomo. (Works for kiteboarding and snowkiting too!)

If you’re editing the video yourself, turn it off.

If you’re shooting your own run, do it a few times with the camera mounted in different positions. If you’re shooting someone else, put yourself in a different filming position on each run. The different versions can be edited together to give the sequence a multi-dimensional look. Gopro sticksor poles work well. This is an obvious one to anyone who has struggled to follow their mate down the piste, shaking their footage right into the desktop recycling bin. Not only does mounting your GoPro on the end of a stick stabilise it somewhat, but it allows you get right up close and personal with the action. As you already know, when it come to wide angled cameras, the closer the better. GoPro’s own ‘three-way selfie mount‘ is great as it allows you to mount it in a variety of ways, not least the configuration that lets you shoot back at yourself without the pole itself being included in the footage.

Pass the GoPro around and shoot from different positions to make your video multi-dimensional.

Adding photos to your video makes the rhythm more interesting. But don’t use the simultaneous photo and video setting—you’ll lose half your fps. Abe recommends using the 12MP Wide to get the best photo quality. Try the multi-shot settings: Abe likes 5 shots per second (sps) for getting good group photos and 30/2sec for shooting a jump or trick.

GoPro footage looks best when you’re up close and personal. If you’re filming a friend going off a jump, get as close as you can (assuming you trust your friend’s jumping skills, of course). If you’re shooting from a distance, try to have something stationary in the foreground. Abe says, “Seriously, it looks so much cooler the closer you are to your subjects.”

Follow these tips, and your GoPro footage will look totally pro. Can’t guarantee the same for your boarding skills, though; that’s a whole different post.

Snowboard terminology: A guide for the beginner or the returning amateur