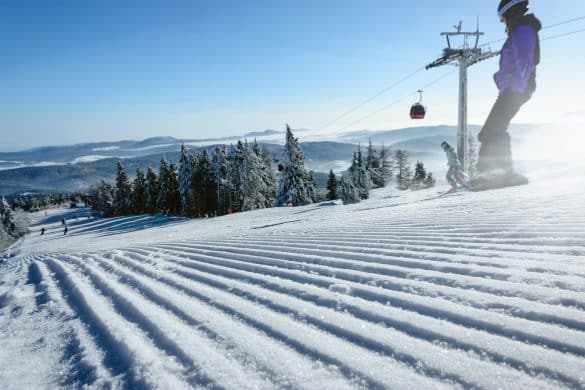 Do You Have To Ski Before Snowboarding? The Debate!

So you’re ready to take to the slopes! Even better, you’ve decided to take up snowboarding. Congratulations, you’re gonna love it. However, you may be wondering, do you have to ski before snowboarding?

You do not have to ski before snowboarding. This is a common misconception which originated from ski schools. It was previously believed that the skills learned through skiing were required before learning to snowboard. You can now choose either winter sport to learn first, depending on personal preference.

Read on for more interesting insights!

Do You Have To Learn To Ski Before Snowboarding?

When snowboarding first became popular it was always seen as an offspring of skiing.

Skiing was seen as the original winter sport and snowboarding as a passing fad. Well, here we are over 50-years later and it looks like we’re here to stay!

Snowboarding has now garnered the respect of skiers and developed into its own artform. The idea that you need to understand skiing in order to snowboard is now outdated.

I have personally proven this when teaching my own friends and family to snowboard, all of whom had no prior skiing experience!

But Does It Help To Learn To Ski Before Learning To Snowboard?

Let’s be real for a second.

Is an experienced skier going to take to snowboarding quicker than someone who’s never skied before?

Of course they are!

This is because they have already mastered the skills required to balance and develop board (or ski) control. Skiers will also understand the lift system, how to read the mountain and the importance of the “downhill edge”.

I’ve even seen expert skiers become pretty good snowboarders within their first few days on a board.

Similarly, experienced surfers may find it much easier to learn to snowboard.

So Why Don’t I Recommend Skiing Before Snowboarding?

Of course some of the hours they’ve put in on the slopes are going to come in handy. However, rather than wasting spending years learning to ski, you could be putting in those same hours mastering snowboarding. Makes sense right?

Personally, I skied for around 10-years before I discovered snowboarding. I have no doubt that my skiing ability translated into a much easier learning curve when I transitioned.

But do I regret learning to ski first?

Don’t get me wrong, I loved skiing. But I didn’t know any better. If I’d started out snowboarding straight away then who knows what level of rider I’d be today. Maybe I was even destined for the olympics!? (Probably not).

Do Kids Need To Ski Before They Can Snowboard?

This one is a little trickier.

It is admittedly easier for children under five to start out with skiing than with snowboarding. This is because it’s easier for them to balance standing head-on than standing sideways. Instructors also tend to be more comfortable teaching infants to ski and so there will be a greater selection of ski schools available.

If you’re committed however, you can still teach kids to snowboard from as young as two years old.

Check out At What Age Can You Start Snowboarding?

In conclusion, nope, you don’t need to ski before learning to snowboard.

In fact, if you’re a skateboarder/surfer/wakeboarder/longboarder then it would be harder for you to take up skiing than to hop straight on a snowboard.

The important thing is to take your time, take some lessons and enjoy the ride.

If you’ve been inspired to give snowboarding a try, here’s some of my favorite snowboard resorts.

How Hard Is It To Become A Pro Snowboarder? Insider Info!

What Is Powder Snowboarding? Why You’re Missing Out!