You will often hear snowboarders talk about frontside and backside: “a frontside 360”, “a backside 180” or “a frontside boardslide”. But if these terms are new to you, the whole thing can seem quite confusing! Read on for the answers.

For jumps, frontside and backside refer to the direction of the spin – but that’s relative to your stance (regular or goofy). Wherever you are now, try going through the motion of a frontside spin: A backside spin is simply the opposite, but you can still try one; it will help you quickly recognise a spin when you see other riders pulling tricks:

For rails and boxes you might have noticed that things seem to be the other way around. What’s going on?

The first thing to clear up is the term boardslide. To be clear, when someone says “boardslide” – as far as the trick terminology goes, they’re actually referring to a “backside boardslide”. It’s just common to drop the “backside” part. So it’s: frontside boardslide vs. (backside) boardslide.

So imagine you’re doing one of these “boardslides” down a box. Once you’re on the box you’re facing dead-ahead, with your chest pointing downhill and your back is facing the start of the box. How did you get into this position on the box? You had to spin 90 degrees in the frontside direction – like a “frontside 90”. So that’s a frontside boardslide, right?

Actually, no. That’s a backside boardslide. With rails and boxes, the frontside/backside tag does not come from the spin that you used to get on the box.

Although this might seem confusing to begin with, the frontside/backside tag refers to which side of the rail/box your were on as you started the trick. This might seem strange, especially as a lot of the rails and boxes that snowboarders encounter are ride-on, where you start off straight on, and not from one side or the other… Something like this:

However, when you consider that many of the snowboard tricks, and terminology, originated from skateboarding, it starts to make more sense. On a skateboard, it’s more natural to approach a rail from one side, even when you’re starting out. Consider this video that explains the basics of a frontside boardslide:

Well it’s exactly the same on a snowboard – it’s based on the part of your body that faces the rail on approach, just before you get on the rail, while the board is still parallel with the rail.

If you’re still thinking: “yeah, but I’m hitting the rail/box straight on, I’m not getting on from the side” – just imagine a rail like the following, where it’s designed to ollie on from the side: 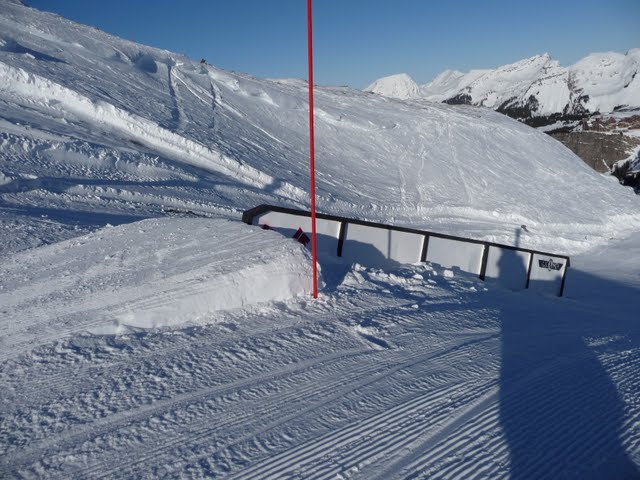 Confusing? A little, yes. Things are different again when it comes to lip-slides on rails and boxes. But don’t worry, if you’re doing lip-slides, you’ll know all about the trick names.

This article is part of the afterbang Guide to Snowboard Tricks.

I’m pretty amped up at the moment to go snowboarding but in the UK, we’re very limited with places to practice.  For me, when…