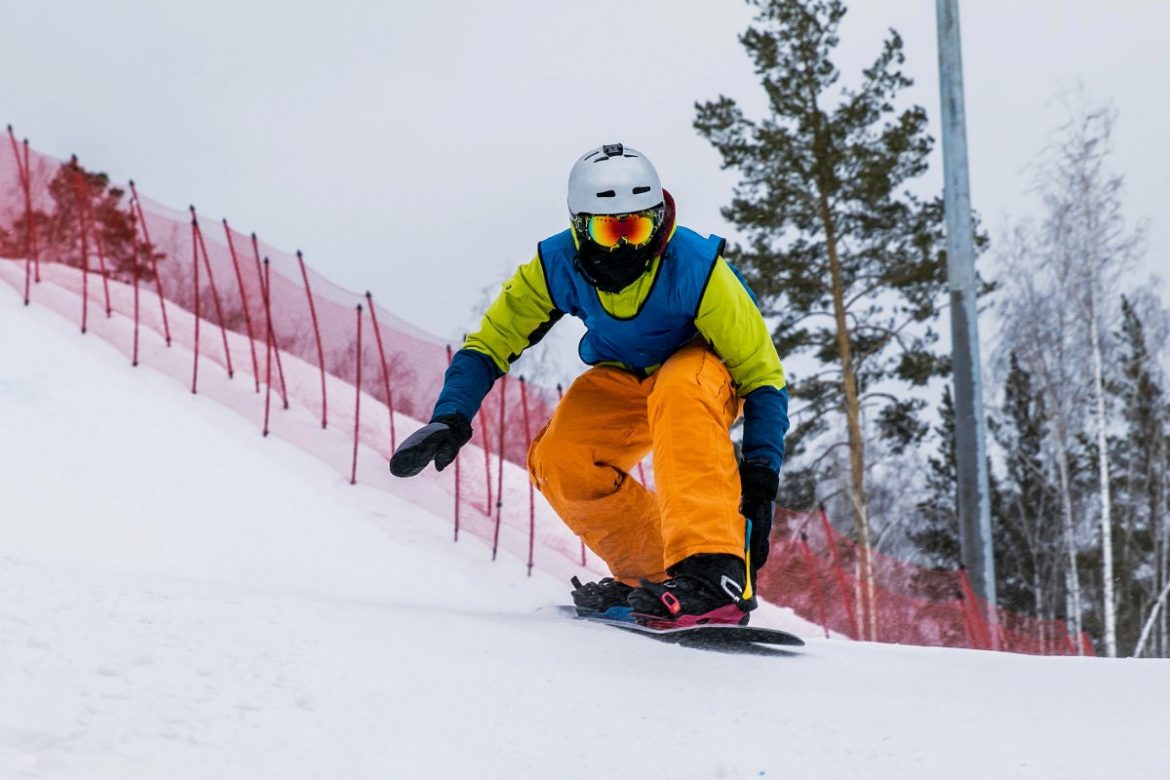 What is snowboard cross? Imagine a Mario Kart course but covered in snow. Now take away the go-karts, red shells, and banana peels and hand the players snowboards instead… You’ve just created an Olympic event!

Snowboard cross is a winter sport that involves four to six snowboarders racing down a steep course uniquely designed for each race. Riders start from a gate that opens and must go around banked turns, over large bumps, and off jumps with the goal of being the first to cross the finish line.

If you came here because you were wondering “What is snowboard cross?” then you’re in luck. I’ll go into more detail about this crazy – and crazy exciting – sport throughout the rest of this article.

What Is Snowboard Cross? (boardercross)

The Rules Of Snowboard Cross

The rules of snowboard cross are simple. Four to six boarders go down a unique course as fast as possible while making sure not to leave the boundaries.

The only goal is to be the first one across the finish line, so there are no extra points for fancy grabs and spins… something Lindsey Jacobellis should have remembered in the 2006 games (watch below).

While there are judges, they don’t choose the winners and losers. However, they’re not just there to look pretty.

While incidental contact on snow and even in midair is expected, the judges step in if any participants look like they’re getting frisky on purpose.

For example, the bad boys or girls who purposely make another snowboarder crash or hinder them as they’re trying to get past may be disqualified.

No two snowboard cross courses are exactly the same, but for the most part, they contain a few common elements like jumps, cambered turns, berms, and rollers.

For more of an idea, try out our POV of the snowboard cross course in Big White Resort, Canada:

As I said, there are no style points in snowboard cross, but that doesn’t mean no jumps!

Riders generally have to catch air a handful of times throughout a course, adding another skill to their tool kit.

And while it might sound like fun, this isn’t your typical tour around the terrain park. Not only do riders have to spot their landing, but they also have to keep one eye on the other riders who are flying next to them.

Courses aren’t straight-shots down the hill with a few jumps thrown in. That wouldn’t be very fun.

While boarders gather wicked speed on straightaways, course creators also throw in twists and turns so that the riders have to be more strategic with their pace.

The turns are cambered, meaning they’re set at an angle so that riders can maintain a lot of their speed going in without eating a mouthful of snow.

As if jumps and turns weren’t enough, you can throw berms and rollers into the mix.

If those words have you scratching your head, you’re not alone. Berms are small terraces or drops thrown into a course, and rollers are similar except that they’re rounder and usually come in a series.

The obstacles are placed in strategic areas, making it very difficult for the boarders to jump off.

Instead, riders are forced to time their runs and absorb the shock of the changing terrain to get as little air as possible. The goal is to maintain speed.

With such wild terrain combined with riders going at high speeds, it would be nearly impossible to avoid crashes altogether.

It’s one of the things that makes the sport so special – the margins between winning and losing are often razor-thin.

And even though most athletes have an incredible amount of focus and skill, crashes happen.

At the last Olympics in Beijing, a Canadian athlete even had an Italian land on top of her going off a jump.

It’s just the nature of the game.

The History Of Snowboard Cross

Maybe it’s not such a surprise given that it’s still a little obscure today, but snowboard cross – or boarder cross as it’s often called – didn’t exist before the 1990s.

Since then, the sport has gained quite the following among adrenaline junkies.

The Birth Of Snowboard Cross

As the story goes, a couple of TV producers in Canada came up with the idea for the event and brought it to MTV Sports Canada. They based it on the already popular motocross.

Supposedly the first-ever race took place on a sunny day in 1991 in Whistler, BC. Wish I coulda been there!

History At The X-Games

Snowboard cross was a part of the very first winter X-Games in 1997. Shaun Palmer took home the gold in that year’s final, and the sport continued to be a big part of the games for years.

The X-Games removed the event in 2012, but they must’ve known it was a mistake to do so… they quickly reintroduced the wild race in 2014. As of 2022, it’s still part of the winter X-games!

History At The Olympics

As with most sports, the Olympics were a little slower to pick up snowboard cross. It didn’t make its debut until 2006 in Turin, Italy, but it had a strong following by then.

The winners that year were America’s Seth Wescott on the men’s side of the competition and Switzerland’s Tanja Frieden on the women’s.

Read this article for more on the history of snowboarding in the olympics.

The Popularity Of Snowboard Cross

Snowboard cross has basically always been a part of the x-games, only being absent for one year.

It’s also been in every Olympics since its first year as an official event in 2006, and most competitors dedicate themselves to that event alone.

The men’s semifinals at Beijing alone had participants from:

After having plenty of success with the singles events, the IOC decided to crank things up a notch, introducing mixed snowboard cross as a new event at the 2022 Beijing Olympics.

The rules for this event are mostly the same as the individual race, except riders are part of a team of one man and one woman.

The male side of each team takes off first, and once times are recorded at the bottom of the course, the female sides are released at the top according to staggered times.

The USA’s Nick Baumgartner and Lindsey Jacobellis took the gold at the first-ever event, with Italy coming in second and Canada in third.

Snowboard cross is about as high flying as racing sports come, and judging by its popularity at the x-games and the Olympics, it doesn’t seem to be slowing down.

Men and women alike are picking up the sport, making the event more competitive each year, so now is as good a time as ever to start following it!

What Is Freestyle Snowboarding? How To Get Started In 2022