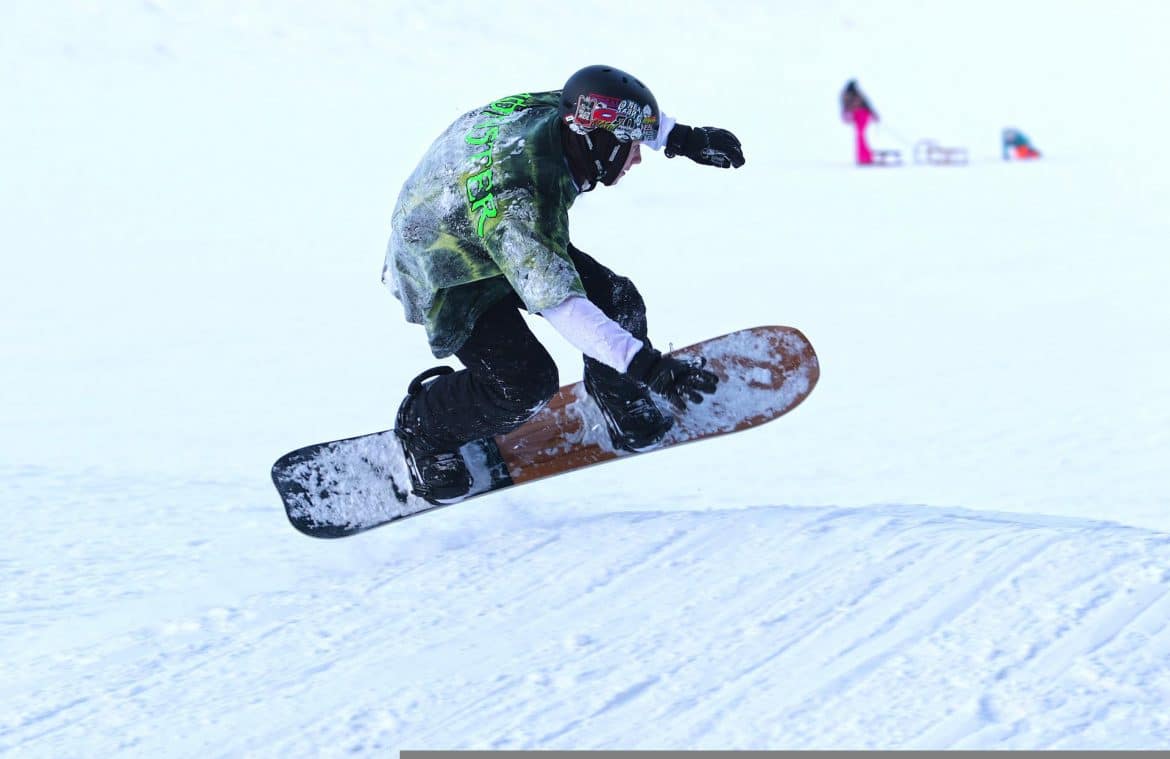 There’s no denying that snowboarding is an adrenaline-filled sport… It’s what keeps us snowboard addicts coming back. But it can also be risky. Newbies and professionals alike often find themselves wondering, just how dangerous is snowboarding?

In this article, we will discuss how dangerous snowboarding is, the risks of snowboarding, and what you can do to ensure you stay safe on the slopes.

How Dangerous Is Snowboarding Really?

Snowboarding is a high-adrenaline sport and can provide hours of endless fun. It is one of the fastest-growing winter sports in the world; snow resorts draw crowds of people during the winter season, from beginners to seasoned professionals, all wanting to take part in the excitement.

Snowboarding is dangerous for beginners who do not receive proper training and make risky decisions. Snowboarding too fast can result in a loss of control and collision with stationary objects. Tricks such as jumps, grinds, sharp turns, and dips can lead to severe injuries if not landed properly.

But don’t worry! Whilst this may sound intimidating, the risk of injury is relatively low. You’re statistically at higher risk on the drive to the slopes than when actually snowboarding. Check out some of the stats below.

Is Snowboarding Safer Than Skiing?

Both sports are adrenaline filled, which basically means they come with risk. But is snowboarding safer than skiing?

A thorough investigation demonstrated that snowboarders are 50-70% more likely to sustain an injury but 33% less likely to die than skiers. This suggests that the overall risk of major injury is lower for snowboarders than for skiers.

I know what you’re thinking… but we take a couple of knocks every weekend! Well, venturing to the terrain parks skews the odds of injury against us (as per the below video). But the overall average odds remains in our favor.

Are Beginner Snowboarders At Higher Risk Of Injury?

Unfortunately, yes. Beginner snowboarders are at the highest risk of injury.

The good news? Beginners are more likely to sustain relatively minor injuries. Experienced riders have a much lower incidence of injury, but when it does happen, it tends to be much worse.

Likewise, beginner skiers are injured less, but usually sustain worse injuries than snowboarders. This may be because it’s harder to achieve high speeds on a snowboard as a newbie.

Learning To Fall Safely As A Beginner Is Essential!

As a beginner, you will often lose your balance and fall. This makes sense when you consider that both your feet are essentially fastened to a wooden plank.

When you start out, you’ll be falling more often than not. Don’t be disheartened, we’ve all been there!

Learning how to fall correctly so that you don’t dislocate or break your wrist will help lessen the number of injuries you sustain.

Mastering snowboarding takes a lot of practice, but it will pay off, and as a more seasoned snowboarder, you will fall a lot less and be able to slide faster down the slopes… and even do tricks.

Falling and getting hurt is not the only thing to worry about when thinking about your safety. Weather conditions can get pretty gnarly in the cold winter months, especially on off-piste mountains.

The Risks Of Snowboarding

Like any other sport, there are risks that accompany snowboarding.

Still, that does not mean you should put your dream of gliding through the alpines aside. Snowboarding is a lot of fun and does not have to result in any injuries; just be careful and remember that you don’t have to impress anyone to have a good time.

Below are some of the risks that accompany the sport of snowboarding:

Going Too Fast Can Lead To Collisions

Sliding down a slope at a super-fast speed can be exhilarating, but it is way more difficult to stop. Hitting another snowboarder or a stationary object can result in serious injuries, especially at high speed. Colliding with stationary objects is one of the leading causes of snowboarding fatalities.

Falling when snowboarding is unavoidable; whether you are a beginner or a novice, you will fall sometimes. Falling might not sound too bad, but it can cause a variety of painful injuries, including sprains, breaks, and concussions. You can get seriously injured if you land wrong or hit your head.

Snowboarding in the backcountry might sound like a great adventure, but it can lead to some serious problems as the terrain is unkempt, which makes it easier for you to hit hidden rocks, and there is also the chance of avalanches occurring.

Reverse your off-piste adventures for when you have a couple of snow seasons under your belt.

The weather can change fast, and if you are not careful, you can easily get caught in a storm or stranded on a backcountry mountain in freezing conditions, making it easy for hypothermia to set in.

It’s essential that you practice caution while on the slopes and avoid getting stuck in any conditions that are too hairy.

Off-Piste Soft Snow Can Pull You Under

Sliding down untouched soft snow might sound like a dream come true. However, this environment is particularly dangerous for snowboarders. If you fall and are dragged under the snow’s surface, there is a chance that you could get stuck and suffocate.

Feeling the adrenaline pumping through your veins while snowboarding can be exhilarating, but staying safe should always be the top priority. Remember, there is nothing fun about breaking bones.

Make sure you follow the following snow safety guidelines, and you should be set for a fantastic time.

Below I will discuss each of these tips in further detail.

If you have never snowboarded before, make sure to take some lessons before trying to make your way down the slopes on your own. It is also vital to ensure that you are fit; snowboarding is a high-intensity sport, and being unfit will make it super difficult for you.

Knowing how to fall is essential, it might sound strange, but it will save you a lot of pain in the future. A knowledgeable instructor will be able to show you all the proper techniques.

Be Aware Of Other Snowboarders

Vigilance is key to snowboarding safety. While on the slopes, it’s essential that you always know where your fellow snowboarders are in your surrounding area.

Don’t ever stop in the middle of the slope. Only stop when it is safe to do so. Otherwise, another snowboarder might collide with you, which can cause serious injuries.

Prepare Before Hitting the Slopes

Always know the weather forecast, and don’t ever go snowboarding if there is a chance of snowstorms. This brings us to your gear and safety equipment.

Wear layers and bright colors so that you are easily visible. Make sure your gear is good quality as well as water-repellent and slide-resistant. Wear wrist guards and a helmet that fits properly.

You can also buy these Bodyprox Protective Padded Shorts from Amazon.com (not an affiliate link). These shorts will help protect your hips, thighs, and tailbone. They are durable and flexible, so you can comfortably wear them under your pants.

Here is an informative YouTube video sharing some important information on safety gear and how to fall:

Snow resorts have designated areas for snowboarding and skiing, which are much safer than going snowboarding in the backcountry. That being said, if you are going backcountry snowboarding, make sure not to go alone and that somebody knows where you are.

Always have some form of communication with you. It also never hurts to attend a first aid course, if possible!

So how dangerous is snowboarding?

Snowboarding can be dangerous for both beginners and seasoned professionals. The most common injuries for beginners are fractured or dislocated wrists. Professional snowboarders are more likely to pick up severe injuries, as they might try to do riskier tricks.

Be cautious when you are out on the snow: watch out for other snowboarders, and don’t try to go faster than you are comfortable with.

When taking part in any sport or recreational activity, there is always a chance of getting hurt. If you are careful, you can have a lot of fun without sustaining any serious injuries.

Am I trying to put you off? Absolutely not! Snowboarding is incredible. The better you get, the more epic it becomes. But also the more risky… But as the saying goes, if you don’t risk anything, you risk even more.