The annual Snowbombing Festival is nearly upon us with English rock band Kasabian headlining with an ‘intimate sunset acoustic show’ but for those who’ve never heard of the Snowboarding Festival, here’s some more information for you on this increasingly popular snow event.

Are you looking for something unusual, unique, and totally mind blowing to do with yourself this spring? Want to get out and enjoy the fresh air and maybe get some snowboarding in whilst having a blast? Most importantly are you looking for the musical experience to end them all? Then the Snowbombing festival is made for you!

The Snowbombing festival was started in 2000 as a nightclub promotional and has grown into the popular week-long winter sports and music festival that is held annually in the spring at the Austrian ski resort of Mayrhofen where it has been at home since 2005. 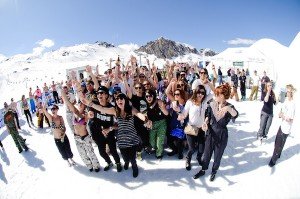 The Snowbombing Festival is filled with a unique blending of fresh air, blue skies, black runs and white-hot parties. Should you choose to attend your Days are spent skiing or boarding, rocking out to music performed live on mountain top stages or relaxing in the spa of a nearby 5 star Hotel. Then your nights would deliver cutting edge performances from world class acts brought together from various musical walks all to perform in unique venues; that range from an igloo positioned high in the mountains, to an enchanting forest clearing lit up for the party and filled with screaming fans. This makes the Snowbombing experience a mystical, musical, and entirely without equal anywhere else in the planet.


Europe’s biggest snow and music festival was originally a DJ with electronic dance music-themed event, but in 2008 it was updated to include and feature live acts on the bill, reflecting the resurging demand for indie/rock music. The event is formatted and designed to combine winter sports (primarily snowboarding) with a combination of on-piste and après-ski musical performances and uniquely themed parties placed in unusual locations, including a forest clearing, an igloo village, a traditionally remote alpine farmstead and an open-air street party.

Artists who’ve appeared at various Snowbombing events in the past include:

The event has a reputation for its imaginative and humorous elements and keeping with traditional Austrian cultural references being embraced (e.g. oompah bands, lederhosen and sausages) and given over to a contemporary or surreal twist. Unconventional clothing is greatly encouraged in a series of fancy dress themes which are often strictly adhered to by many attendees (aka ‘Snowbombers’) and Snowbombing even has its own way of attracting a variety of cult celebrities like Mr. Motivator that are often engaged to come out to entertain and interact with the crowds.

The festival is also notable for being the first to give those who attend an alternative means of arriving to the festival other than flying. The Snowbombing Road Trip is not a race as one might think at first but a leisurely international drive from the UK to Mayrhofen, involving several collection points en route, an overnight ‘pit stop’ in Frankfurt, and an arrival procession in Mayrhofen that sets off the event to its finest opening each year.

The founding father of Snowboarding Days. As a long-suffering snowboard addict, Fraser understands the need for straightforward and honest information. He's here to share real, helpful information - without the normal marketing BS.