Becoming qualified as a snowboard instructor is something that I’ve thought about quite a bit – instructing is good way to get a snowboarding job that keeps you in the mountains all winter. Not a bad start if you can’t get enough of shredding.

With the possibility of doing a season in 2011/2012, I thought I’d have a quick browse around for the resorts that are currently high on my list: Breck, Whistler and some European resort yet to be decided.

To be honest, if we do go ahead with this season, I doubt I’d devote the whole thing to training to becoming an instructor: 1) I’m not totally sure that it’s something I want to try, and 2) I’d like a bit more freedom for my first winter in the mountains. However, a lot of the instructor-training companies out there offer programs with different lengths – aimed at different qualifications. Sometimes they’re just being based around improvement. So you don’t have to go for a full, eleven week course… 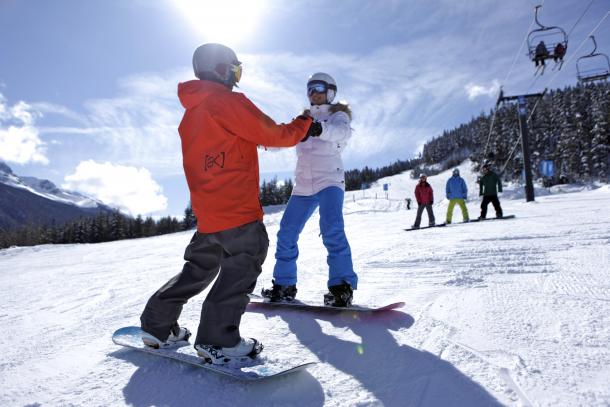 I got chatting to one of the guys from NothinButSnow – I was interested because they cover both Whistler and Big White. Ever since reading about Big White in the WorldSnowboardGuide, I’ve wanted to go. For a two week holiday, the problem has always been that it’s a long transfer at the end of a long flight. Getting to somewhere like Whistler is easy in comparison. But if you’re going for an extended period of time, that’s less of an issue. The terrain and snow is supposed to be pretty awesome there, and it’s fairly quiet…

NBS offer ski and dual-discipline training, but I’m obviously only interested in the snowboarding courses:

If you go for one of these instructor courses, you become CASI qualified, which is a qualification recognised all around the world. Given that you’re aiming toward a certain standard of snowboarding, instructor courses are a great way to improve your technique. The programs get really good feedback, so as well as getting qualified to teach, you get the side benefit of being a much better shredder!

What’s good about one of the courses offered by a company like NothinButSnow is that they sort pretty much everything out for you: on site reps 24/7, flights, transfers, accommodation and all of the instructing. As you’d expect, one of these courses includes a season pass – even for the shorter, 4-week variety. The course training is 5 hours per day, Monday – Friday, so if you’re keen, that still leaves additional time to snowboard on the hill in whatever way you’d like.

If you want to take a look at their site, it’s here: NothinButSnow

Is it something you’re ever thought about before? Do any of you have instructor-qualifications? Being qualified as a snowboard instructor is a useful card to hold, and as far as jobs go, there aren’t many that get you out snowboarding as often…

Plan for Snowboarding Next Summer