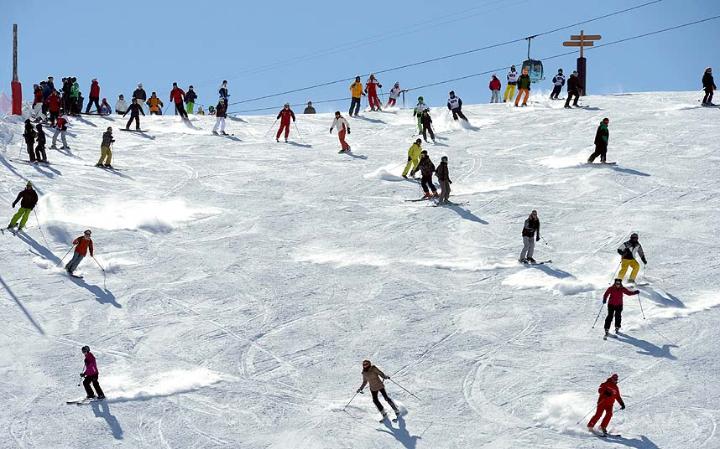 Who Has The Right Of Way On The Slopes?

Last March, I had a collision on the hill, I sprained my ankle and that messed up two weeks of snowboarding. I’m going to start this article by saying: (a) I accept responsibility for the collision and (b) I’m glad that I was the only person affected – the other dude was ok.

Do You Know The Responsibility Code?

This got me thinking about right of way on the mountain, as well as some of the other issues that come under being safe on the slopes.

You’re probably aware of the following rule: People ahead of you have the right of way. It is your responsibility to avoid them.

This is actually just one of the rules, or guidelines, that form the skier/snowboarder responsibility code. If you have a quick search around the web, you’ll find the list in a many different places, with slight variations, but essentially the guidelines are consistent. I took the following from About.com:

Let’s look at a few potential problem areas with being safe on the hill.

A sudden change of direction?

In the collision that I mentioned above, I was riding down a red run. It wasn’t particularly steep, more of a wide and fast run. I was practicing my carving and travelling fast. I was approaching a skier in front, who was making short, consistent turns. I planned to go past on his right hand side and was traversing in that direction to do so…

As I got close, the guy made a sudden change in direction. He swept a long way to the right; it seemed as if he was going to stop at the side of the piste. I was on a toe edge, travelling fast, tried to hammer the anchors on, lost the edge on the afternoon-bumps and slid into him.

Like I said above: the accident was my fault. I was travelling too fast to deal with a possible movement of a skier/snowboarder downhill of me. And as per the rules, it’s my responsibility to avoid them.

But personally, I don’t ride like that. If I’m travelling down a slope and decide I want to make a significant change from my current line, I look back up the hill. Why not? That’s what you do when you’re driving a car; if you want to move across into the outside lane you check your mirrors, look over your shoulder and then indicate.

There’s nothing about that in the responsibility code. Should there be? Currently, the downhill skier/snowboarder has the right to move in whichever way they desire, providing they’re already in motion. Personally, I think if you’re on the hill, you should consider how your movements could affect those around you…

Looking up hill before setting off

Now this is covered in the responsibility code, and I think it’s a guideline that more people should be aware of:

On busy slopes I constantly encounter other slope users who set off from a standing position, without checking what’s coming down the slope. It’s dangerous – they often set off right into someone elses path.

Some people might consider this rude, but when someone pulls out in front of me, I slow down and inform them that they should check up the hill first…

It’s one thing to follow the general responsibility code, but if a slope user decides to ride through a park, they should be aware of park etiquette and park rules. The worst situation of people being unaware in this regard that I’ve encountered, is the Stash in Avoriaz.

Because in many ways it appears as a run, you get a lot of beginner and intermediate skiers (sorry, it is mostly skiers) making their way through the stash, zig-zagging as they go. Often they’re not actually using the park features, they’re just interested, which is understandable.

But, too many times I’ve seen a skier turn across the start or the end of a box or rail, with near-collisions being the result. They sometimes stand in front of a box, or at the end, blocking the ride out. I’m amazed that the ski schools will actually lead a convoy of beginners through the Stash, slowly, weaving in and out and around the features…

The rules in parks are different; skiers and snowboarders alike need to be safe when using them.

Have you been involved in any on-slope collisions? Were you aware of the responsibility code? Do you see people or groups with unsafe habits on the hill?

Best Tunes To Listen To Whilst Snowboarding