McMorris landed the first triple cork 1440 at Snowmass in March 2011 and again in May during filming for “The Art of Flight,” but pulling it in competition is another thing altogether. After Torstein Horgmo’s gold medal triple flip in 2011, Winter X Games organizers decided to build a bigger, 80-foot step-up style jump for the competition this year in order to accommodate the level of progression happening in the sport and make way for more triple cork spins. Friday marked the first time the triple cork had been seen in competition. 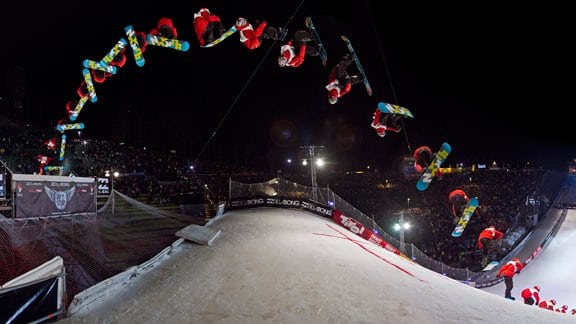 “I was really pumped to land it,” McMorris said. “It could’ve gone either way, but I’ll take the win and it’s really cool to get my first X gold.”

Horgmo actually went bigger than McMorris in Friday’s final, nabbing a perfect score for his own backside triple cork 1440, but fell short of the top spot in the overall calculations. Big Air competitors are judged on the combined total of their two best tricks, and Horgmo fell on several triple cork attempts before landing it in his final run. McMorris’ frontside double cork mute 1080 in his first run helped him hold the overall lead. Sebastien Toutant claimed the bronze, thanks in part to his double cork Cab 1260.

“The jump was big enough. I think we were just missing a little more lift on the takeoff – a little pop,” said Horgmo, the first to attempt a triple in Friday’s final. “It was kind of a floater and it was so cold outside, but it was a lot better than last year’s jump. I had to go for it. It’s the X Games. It’s just something you gotta do.”

Friday was a huge day for McMorris, who also finished first in the elimination round of Men’s Snowboard Slopestyle and is a favorite to win the Slopestyle finals Saturday. This is his second year at Winter X Games. In 2011 he won silver in Slopestyle as a rookie and just missed the Big Air podium in fourth place. So far, this is shaping up to be his season; he also won the O’Neill Evolution Big Air in Davos, Switzerland, (a 6Star event on the TTR World Tour) in February and is the current leader in the Burton Global Open series after winning the slopestyle event at the Burton New Zealand Open in August.

“Today was heavy,” McMorris said after the late-night competition concluded Friday. “I’m just so happy with how Slopestyle semis went, and now this. And I’ve got a big day tomorrow.”