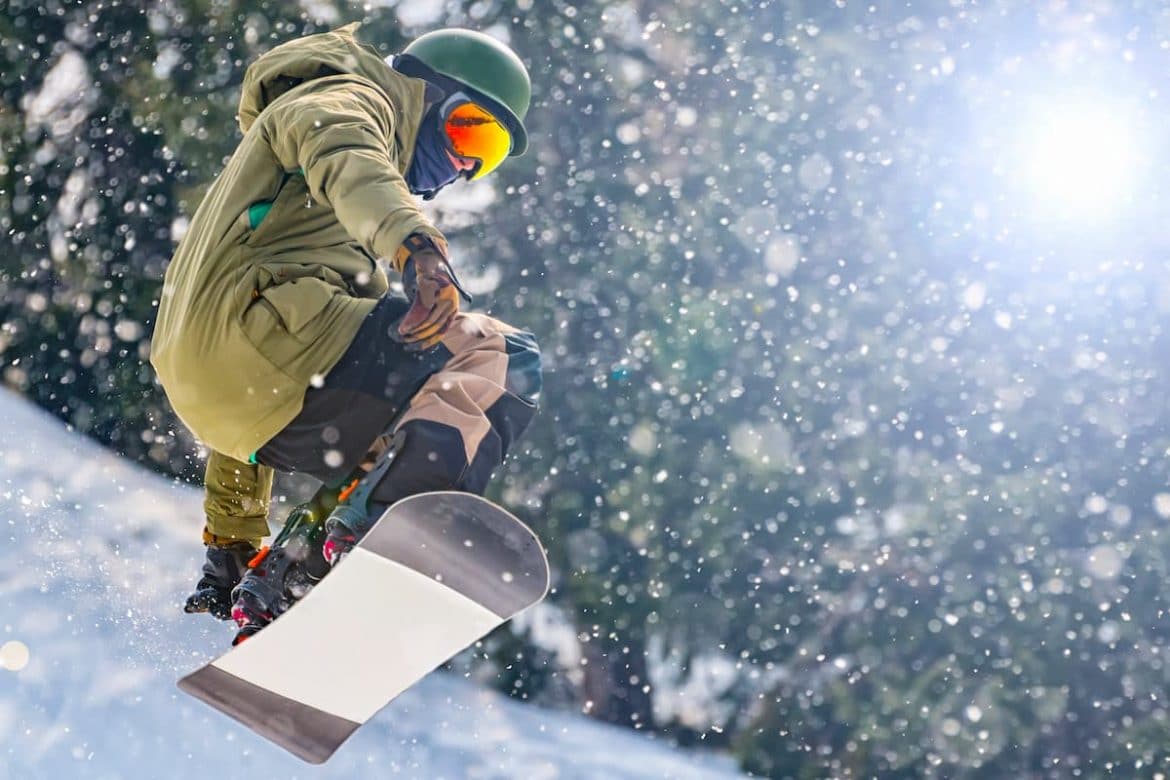 Building a snowboard jump is a right of passage for every budding snowboarder. All that’s needed is snow, a shovel, some salt, and your snowboard. Right? If only it were that easy! Let’s talk about how to build a snowboard jump.

Here are 8 simple steps for building a snowboard jump:

Let’s dive a little deeper. I’ll show you how to pick the right spot for your snowboard jump, plus some common mistakes to avoid. You’d better send me clips of your kickass kickers once they’re done!

How To Build A Snowboard Jump

You need an isolated spot at the end of a reasonably steep hill (to build speed).

Contrary to what your survival instincts tell you…

It’s better to have too much speed than not enough!

You can always slow yourself down as you approach the jump.

But you cannot gain momentum if there’s not a sufficient runway.

Think of your poor knees!

So do your best to pick a steep enough hill.

Alternatively you could build yourself a drop-in, but this adds even more digging to the build.

What goes up, must come down.

Ideally on a downward slope.

If you’re new to snowboard jumps, it can be tempting to plan for a flat landing.

Think of your poor knees!

You’re also going to want enough space to ride away smooth, importantly, without obstacles like trees.

2. Build The Foundation Of The Jump

After you’ve chosen your location, you’ll want to start building the foundation of your jump.

Choose a sturdy shovel, and start piling up snow. Lots of snow!

When shaping the jump, the snow will significantly compress, so you’ll need much more than you think.

Your foundation base should be large enough to make up for some snow that will be lost or packed in.

There are several different strategies for forming the foundation of a snowboard jump.

…As shown in this video from Tommie Bennett:

3. Shape The Back And Sides Of The Jump

Ensure that your jump has the proper support.

Spend specific time shaping the sides and the back.

Pack them down hard!

Then use your shovel to dig around the foundation, creating a clear boundary for the jump.

It also means you’re less likely to miss the jump when the light gets low.

4. Design The Launch Area Of The Jump

This is the part everyone skips to when learning how to build a snowboard jump (ramp).

If you’ve carefully followed the above steps, now you get to design the angle of your snowboard jump.

The shape of your launch area depends on a few things, including:

Design your launching area differently depending on these conditions.

It also of course, depends on your skill level.

5. Smooth Out the Runway and Launch Area

With your shovel and snowboard, you’ll want to smooth out your snowboard jump’s runway and launching area.

Use the back of the shovel to do the initial smoothing of your snowboard jump.

You can then use the snowboard to smooth out the runway too.

Try to smooth the edges as much as possible so you don’t have any bumps on the runway.

You also want it packed down hard.

Otherwise if you carve up the jump, it will fall apart!

6. Sprinkle Some Salt On The Jump

Ok, it might seem strange stashing salt in your snowboard backpack.

(Is somebody breaking out a grill?)

But salt is your secret weapon!

Using salt on snow is a strategy snowboarders and skiers have used for years.

Salting the jump melts the top layer of snow, forming a nice seal across the top of the jump.

This results in a nice, packed-down jump that can withstand even the hardest of slams.

7. Do A Final Smoothing Of The Runway And Launch Area

After salting, give the jump a few minutes to harden up.

Now use the shovel and snowboard to finish smoothing out the runways and launch area of the jump.

The best way to use your snowboard to smooth out the jump is holding a binding in each hand and pushing it up and down. Alternatively, try rocking back and forth whilst strapped into the snowboard – sort of like buttering.

8. Test Out The Jump With A Few Straight Airs

Once the snowboard jump is constructed, packed down, and smoothed out, it’s time to try out that bad boy.

It’s crucial to make sure the snowboard jump can withstand a few basic tricks before trying more difficult ones.

Send a few straight airs to start with, getting progressively bigger.

Try to stay central on the jump so you don’t shave off the edges.

Now to start really throwing down.

Increase the difficulty of your tricks gradually.

Make sure your buddies are on hand to catch some footage… and rescue you if things go wrong.

Now that you know how to build a snowboard jump it’s time to get building!

A final tip for your first jump is to aim for a soft, powdery landing.

Yes this makes it harder to ride away clean.

But your bones will thank you!

Now to choose the best snowboarding destination to host your masterpiece.

As a qualified snowboard instructor, Ben has a bottomless knowledge of tips and tricks! He's also our resident snowboard gear nerd. When he's not lapping the park, you can find Ben drooling over next season's product catalog. Got a question about gear? He's your man! Learn More >

What Is Slackcountry? A Definition And A Warning!