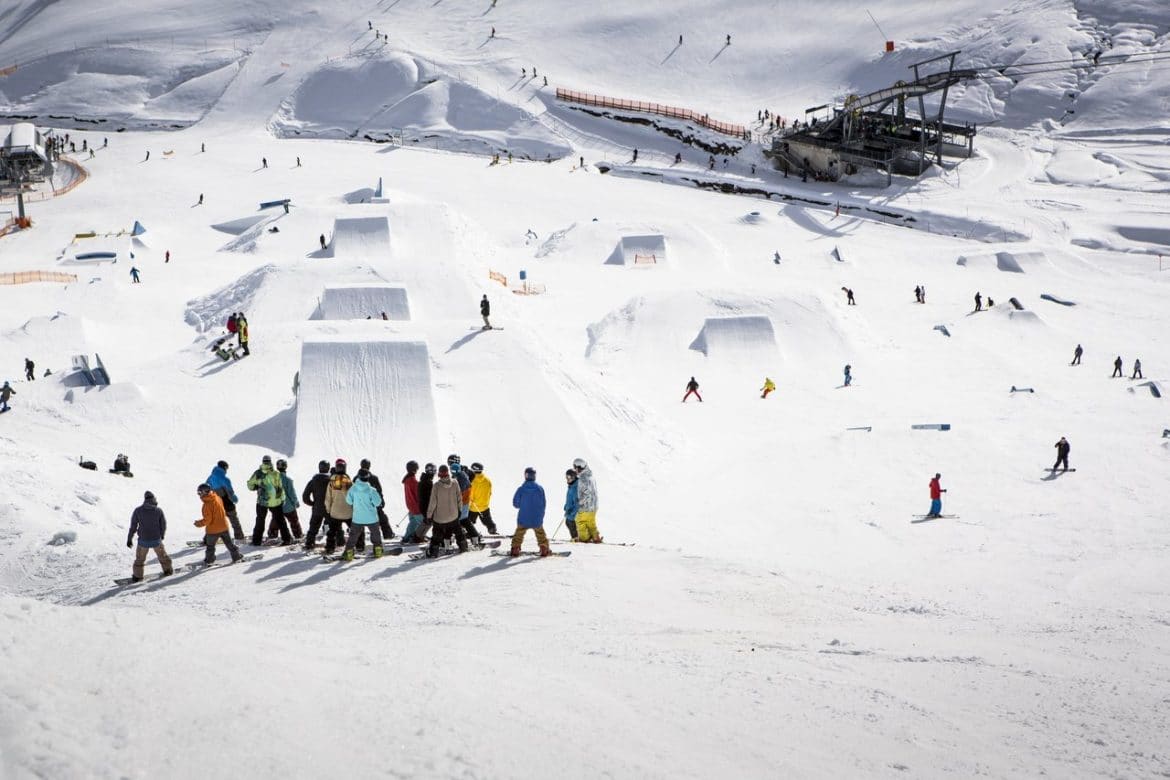 You’re sat at the top of the park, waiting to go… It’s been your turn for a while now, but you keep waving people through. You’re nervous. There’re a lot of people here, that means a lot of people watching. What’s worse, there are a lot of really good snowboarders here. You don’t want to mess up in front of everyone!

It’s very easy to be put off by crowds and cliques in these types of situations. I’m sure it’s happened to almost everyone in life, at some time or another. I know that I experience both sides of this with snowboarding. Here are a couple of examples:

There are three very good reasons that you shouldn’t allow yourself to be put off by other people watching. To be honest, you only need think about the first, but you may be thinking “that’s easier said than done” so I’ll list all three…

1. Snowboarding is about having fun!

We all snowboard because it’s fun. A lot of fun. When you’re telling friends about your recent snowboard trip, you’re telling them how much fun it was. And when it comes to fun, there’s no right or wrong (you can trust me, Burton made a movie about that very concept).

So if you’re at the park as a beginner/intermediate/expert freestyler, and fun to you is trying something out on the kicker line, or maybe the rails and boxes, just do it. Block the other people out if you’re worried about them watching. You’ll feel a lot better if you just give stuff a go, rather than waiting and stewing; or worse, not even trying at all.

Even better, interact with your fellow snowboarders, you’ll probably have more fun. Ask them how they’re doing, what they’re up to. They might offer some help or tips, you might be able to help them, whatever. You’re there to have fun, and guess what, they’re there to have fun too!

Ideally, you shouldn’t let anyone else stand in the way of your own enjoyment. But that can be a little easier said than done, so read on…

2. If you’re put off by other people, you’re expecting the worse in them

Give people some credit. If you’re new to freestyle and you mess it up on a box or a kicker, it’s pretty unlikely that people are going to laugh at you, or tell you to get out of the park and stop wasting their time. What’s more likely, is that they’ll be sympathetic to the bail, to the learning process. Everyone slams when snowboarding.

As an example, check out my stupid bail on a kicker in Avoriaz:

At the end you can hear the crowd go “oooooh”. From the top it probably looked pretty hairy. They sympathised with the error, the potential pain. Sure, a few people might have thought it was funny, in retrospect it was, but the overriding reaction wasn’t laughter or criticism.

The people that let me through at Castleford – if one of them stacked it, the first thing I’d do is ask if they were alright. If someone asked me for help, I’d offer my best to them, with the caveat that I’m no pro.

3. Everyone gets nervous at some point

Way back in 2006 there was a series on the Extreme Sports Channel called Snow P.I.G. All professional snowboarders; one of them would do a trick, and if landed, the others had to follow. In the final, it came down to Scotty Arnold and Travis Rice. For the whole series, everyone had been using the 60′ kicker. Travis Rice decided to amp it up a bit and moved to the 90′ kicker. I’m pretty sure the trick was a backside 180, briefcase. He landed it.

Then it was Scotty Arnold’s turn. He’s at the top, ready to drop in, and he’s nervous. You can see it. It had started snowing, the run-in was changing, he was unsure. He gets the guy on the sled to radio down to Travis Rice and ask him if he speed checked. When he gets the answer, he asks the radio guy to make sure Travis isn’t playing around. He’s nervous about hitting a huge kicker.

I thought it was brilliant. Not because Scotty was nervous; I really like Scotty Arnold, I wanted him to win. What I really liked about it was the real life view of a pro shredder. Hey was nervous too, and with good right.

Getting nervous is part of snowboarding. It’s normal. But don’t get nervous because other people are there; they’re in a similar situation to you – having fun and trying to get better.

Have fun in the park

You’re at the park to have fun. So is everyone else. On the off chance that you do run into a real douchebag, someone with real attitude, just ignore them. Who’s bothered by what they think anyway?

What’s more likely is a park full of friendly snowboarders. So remember:

How Real Are “Secret” Powder Spots?