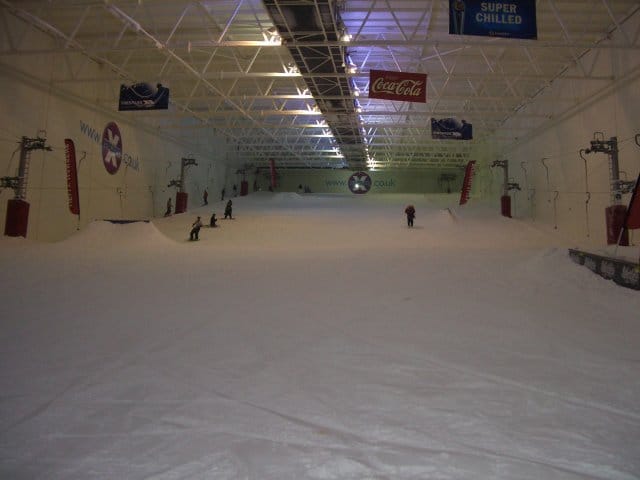 Naturally I’ve had some doubts about whether or not I was ready to try snowboarding, whether or not it would hurt, be restrictive, etc. However, over the past 6 weeks or so I’ve noticed good improvement – notably I’ve been able to run on concrete and take the impact. It’s not 100% by any means and I’ve done it sparingly, preferring the treadmill and bike. But the progress has given me confidence.

Friday night was good. Actually, better than good, it was frickin’ awesome!

From the first run down I knew it was going to be ok. Two things gave me some pain:

The small moments of pain went away immediately, and I had no problems the following day, either.

Slow start. The session actually got off to a bit of a slow start. There were two lines in the park. The one on the left was decent, but busy. I was easing in so hung out on the other side, where the “features” were a little lame; they’d just been left there from some over event. We kinda felt like we were wasting our time.

But then we started to warm up. Had a bit of fun playing around on the less-good features, then started to get a little bit of rhythm back. The session got quieter, we moved over to the other side and all of a sudden the stoke was there. It just felt amazing to be snowboarding again.

Nose grabs… The last thing that I was working on before the accident was grabbing the nose. There were some successful attempts, but nothing dialed. On Friday I tweaked the shit out of it! Got the timing and nailed a handful of nice nose grabs. Tres happy.

Evidence. I wanted to video something so that I could show the leg in action. We didn’t hang around for anything in particular, those sick nose grabs for example, and I’m rusty as hell, but I like the evidence all the same.

Apologies to Ian – I did get a clip of one of his runs but my video-skills were so off that I didn’t include it!

Out of the woods? I don’t want to get ahead of myself and assume that there’s no risk of future problems; it wasn’t like I was doing any big jumps, nor did I have any nasty slams. But I am encouraged. A lot. I’ll keep doing what I’m doing: gaining strength at the gym, stretching regularly and getting physio. Plus more snowboarding…

Plan? As I said recently, my plan is to snowboard as much as possible between now and the end of the year. Ideally I’d like to ride at both Castleford and Halifax. As for specific tricks to work on, I’ll wait until I’ve ridden some more and then set myself some goals.

So stoked for snowboarding right now!