Although snowboarding did not become a well-recognised sport until the early 1990s, Burton began manufacturing snowboards and bindings in 1977, when the company’s founder started making his own boards in a borrowed woodworking shop in Stratton, Vermont. From these modest origins, Burton developed into a flourishing enterprise with offices in Europe and Japan that served customers in 27 countries.

Recognised as an industry pioneer, Burton controlled roughly 40 percent of the U.S. snowboarding market during the late 1990s, more than any other company in the world. Here’s a nice infographic that details the Burton Snowboard timeline. 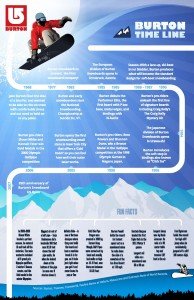 5 Common Bad Habits – and How to Correct Them