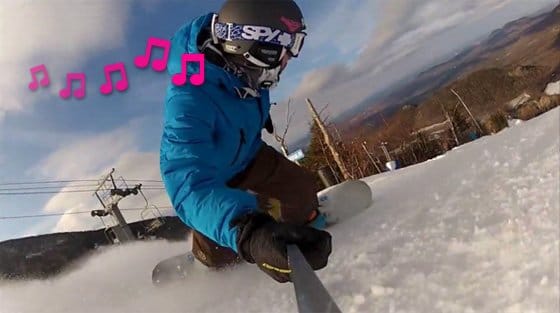 Is Snowboarding With Music Safe?

Collisions on the hill happen. Two skiers, two snowboarders, a skier and a snowboarder, it doesn’t matter – the collisions happen. Sometimes there is little consequence, but sometimes people get hurt. That can suck, especially if it’s not your fault. It doesn’t have to be a collision – sometimes people just get in each others way. Cut the queue, drop in without looking, ride in a dangerous way. Maybe there’s contact, maybe some shouting, perhaps it’s just a few people tutting or being annoyed.

There are many factors that contribute to poor slope use – often times it’s a basic lack of knowledge, not being aware of the things to look out for, or to consider.

But is listening to music one of the snowboarder’s vices? A bad habit that we should avoid? Irresponsible. Or is it simply another way of enhancing the ride…

Is it frowned upon?

Lots of people ride with music playing. That doesn’t mean it’s a good thing to do, but it is desirable for some. If it is a bad idea – there isn’t much push to sway snowboarders away from it.

Helmets have built-in audio. Perhaps the most critical piece of safety equipment for snowboarders can also be bought with audio baked in. Speakers in the ear pads making it super convenient to listen to your tunes. That can only support the listening of music, right?

And then there’s the marketing of headphones. Consider the collaboration between Philips and O’Neill, the Tested on Animals headphones. Seb Toots has “The Bend” model – clearly designed to be durable on the hill; the headband is made from the same tough material used for goggles…

Where does the snowboard world sit on this? Is there a safety message out there relating to music on the hill?

The basic fact: you can’t hear as well when the music is on

If you’ve got music playing in your ears – it’s harder to hear what’s going on around you. That makes you less aware.

Can you argue with that?

If someone shouts “move”, “watch out”, “stop” or in an extreme case, maybe something like “avalanche” – there’s a definite argument that you’re less likely to hear the warning, and therefore putting yourself/others at risk.

Consider this comment on the article about Snowboard Park Etiquette. Alf added the following:

“Couple of other things to think of… dropping in on another rider’s blindside can be dangerous, and, turn your “dope tunes” off. The combination of the above two resulted in two injured people a couple of weeks back – one of them a friend.” – Alf

Collisions are going to happen – sometimes it’s going to be because someone couldn’t hear.

OK – even if you accept that the music is going to make it harder to hear, is it possible that you can still be aware enough? Much of the good practice when it comes to riding safe on the hill comes down to looking and thinking. Checking over your shoulder, looking up the hill, considering the actions of riders around you, anticipating, knowing when to check your own actions…

In the park, as well as shouting “dropping”, riders will also put their hand up when they’re going to drop. If there’s doubt, riders will/should look for eye contact, make it clear who will go. Don’t leave it to chance. We block a feature with a snowboard or skis if someone is ‘down’ in the landing area.

Much of the important communication and responsibility doesn’t rely on verbal messages.

It’s probably true that there are a load of snowboarders out there on the mountain, riding with music playing loud, and they’re more aware than the average slope users. Safer to those around them. More considerate. More aware.

Can you argue with that?

So what do you think? Does is annoy you when you see riders with headphones on, thinking that they’re oblivious to what’s going on around them? Or do you think that rocking to tunes on the hill isn’t consequential – it’s still possible to be safe, and riding with music feels awesome?